At 11:00AM local time, DFM grandly staged a global launching ceremony for its proprietary strategic vehicle models L60 and AX7 at the DFM Booth in the No. 15 Pavilion of the Crocus Exhibition Center. VIP guests including Former Deputy Prime Minister of Russia Sheroff Valeli (transliteration), Secretary-General of the Russia-China Chamber of Commerce for Mechanical and Electrical Products Shiergai Sanakeyef (transliteration), Minister of the People's Republic of China in Russia and Economic and Commercial Counselor Zhang Di and Chairman of the People's Republic of China's Chamber of Industry and Commerce in Russia Cai Guiru joined Head of the International Business Division of DFM Pan Chengzheng, Vice Director of the Technical Center Wen Kaifa and Deputy Head of the Strategic Planning Department Wei Wenqing in attending the launching ceremony. The new vehicles were unveiled in the presence of domestic and overseas representatives from around 30 media agencies (including the Xinhua News Agency and TASS), representatives from major chambers of commerce in Russia, dealer representatives and so on.

At this motor show, the sports sedan DFM L60 made its global debut and received attention for its abundant configuration, unique and trendsetting elements, strong sense of technology and striking sports characteristics. With a wheelbase of up to 2,710mm, the DFM L60 adopts an overall contour that is quite close to the coupe style, making it the first choice of young trendsetters. The AX7 also made its global debut at the auto show: as DFM's first SUV vehicle model in the Russian market, the AX7 was devised by the prestigious DFM Warrior high-mobility special off-road vehicle design team over 7 years of tremendous endeavors, and it inherits the special-purpose vehicle's sterling DNA. With dimensions of 4,690 x 1,850 x 1730mm and a wheelbase of 2,712mm, the AX7 has a hard-edged appearance and a streamlined contour. In addition to its strong maneuverability, the AX7 is equipped with classy, high-tech interior trimmings, an extremely intelligent audio/video system and interconnection system, and such high-tech configurations as the electronic parking brake, smart key, start/stop engine system and so on, making the AX7 perform excellently in both urban and cross-country driving.

Sources say that DFM's business expansion in Russia is a crucial step for the Company's business development in international market, and the L60 and AX7's global launch in Russia fully exemplifies the Company's high attention to and recognition of the Russian market. In April of this year, DFM Russia Co., Ltd. completed the establishment of a sales and after-sales service network and signed pacts with 21 dealers. In May, DFM's proprietary passenger vehicles were officially launched onto the Russian market. 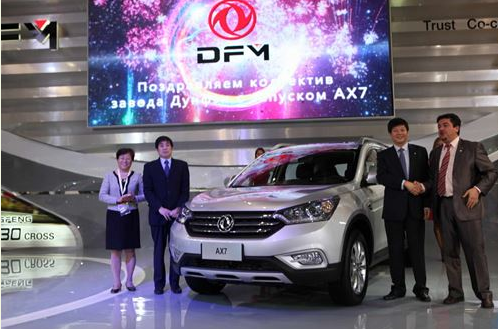