Come for the belief, born for the passion, prepare for the tennis, and famed for the success. On September 21st, 2014, the DFM Wuhan Tennis Open was unveiled at the Optics Valley International Tennis Center in which 56 p s from 20-plus countries joined a one-week contest.

The opening ceremony of the Open was attended by Vice Chairman of the Chinese Olympic Committee Cui Dalin,   Ruan Chengfa, Vice Governor of Hubei Province Guo Shenglian, Mayor of Wuhan City Tang Liangzhi, Chairman of DFM Xu Ping, General Manager of DFM   and Deputy General Manager and Chairman of the Wuhan Sports Association Tong Dongcheng. During the opening ceremony, Tang Liangzhi and eminent tennis p of Romania and World No. 2 Seed Halep jointly unveiled the commemorative disk for the first year of the Wuhan Tennis Open (see picture below). After that, guest match selector Tong Dongcheng chose the ends for the first games of the Open.

As a brand-new event, the Wuhan Tennis Open attracted all of the world's Top 40 tennis p s to register and join, including such world-class p s as Wimbledon 2014 champion Petra Kvitova, French Open champion Maria Sharapova and US Open champion Serena Williams. Unfortunately, Chinese tennis legend Li Na did not join this tennis feast in her hometown as she has announced her retirement due to injuries. Despite this, such Chinese p s as Peng Shuai, Xu Shilin and Zhang Kailin took part in this event. 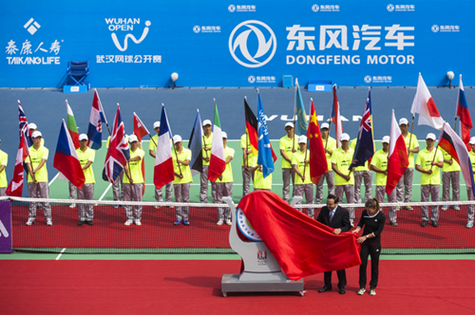 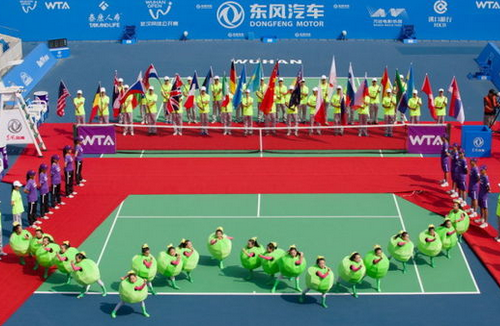