As one of China's most famous automobile manufacturers, DFM was born in Hubei where its development took root. DFM belongs to Hubei, belongs to China and belongs to the world as well. Like the sport of tennis, DFM will extend its business to every corner of the world and win over more customers. Liu Weidong concluded by expressing his hope that tennis players and fans from all over the world will show more interest in DFM and give the Company their support.

Prior to the awards ceremony, the doubles and singles finals kicked off in succession. In the women's doubles, Former World Champion and Princess of Switzerland Hingis and Italian player Pennetta defeated Zimbabwean player Cara and French player Garcia with an aggregate score of 6-4/5-7/12-10 to and win the match and become the champions. Later, in the final of the women's singles, Czech player Kvitova won against Canadian player Bouchard at an aggregate score of 6-3/6-4.

Sources indicate that the prizes of the 2014 DFM Wuhan Tennis Open total US$2.40 million, including US$126,000 for the doubles champions and US$440,000 for the singles champions. 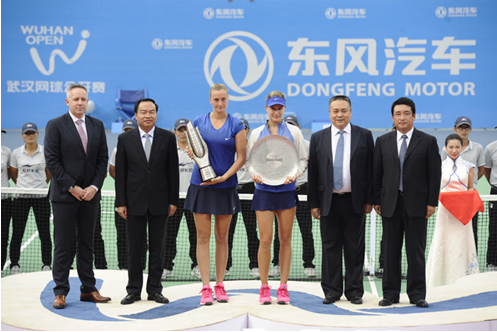