Foundation of DPCA Plant No. 4 Laid in Chengdu

On October 16th, the foundation of the Dongfeng Peugeot Citroen Automobile Company Ltd. (DPCA) Plant No. 4 was laid in the Longquanyi District of Chengdu City, unveiling DPCA s new round of leap-forward development and quickening its pace in developing towards becoming an automobile manufacturer with a production capacity of 1 million units.

DPCA Plant No. 4 will be built in light of the principle 'One-off planning, staged construction, investment in vehicle models first and progressive development', with a total planned investment of RMB 12.3 billion and a total designed production capacity hitting 360,000 units/year. Plant No. 4 will be mainly composed of four shops (stamping, welding, painting, final assembly), a resin shop and two module sub-assembling and integration shops. During the shop construction, such ancillary facilities as the logistics warehouse and testing runway will be built at the same time. It is predicted that the plant will be put into production at the end of 2016. This plant will specialize in producing the three models - DongFeng Citroen, DongFeng Peugeot and DongFeng, but high-end SUVs and MPVs will be defined as its predominant products. Simultaneously, new-energy vehicle products will be involved in the planning. 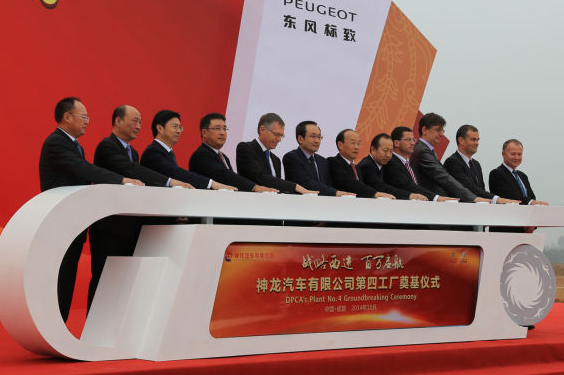