On October 18th, 2014, a new X-TRAIL vehicle rolled off the production line, heralding the official kick-off of production at the DongFeng Nissan Dalian Plant after 28 months in construction. With a total investment of RMB 5 billion, an annual production capacity of 150,000 units and a total built-up area of 1.32 million square meters, the Dalian Plant Phase I specializes in producing SUVs of the Nissan brand.

In Phase I, the Plant's production capacity will hit 150,000 units per year. Upon completion, Phase II will put the Plant in a position to produce 300,000 vehicles per year. The Plant will predominate in the production of SUV vehicle models subordinated to DongFeng Nissan. According to Vice Managing Director of DongFeng Nissan Ren Yong, it is positioned as a 'Charming Plant'.

The Dalian Plant now possesses five major shops (stamping, welding, painting, resin, and final assembly) and it has introduced advanced technologies and equipment from the No.2 Plant of the Dongfeng Nissan Passenger Vehicle Company. In terms of the advanced manufacturing process, the welding shop of Dalian Plant has markedly improved overall automation to 83%. Its Final Assembly Shop realizes the automated conveying, fetching and placing of components like tires and seats. Its Painting Shop has a fully robotic automatic spray coating system that leads to a remarkable improvement in production efficiency; in particular, water paint is employed for intermediate painting and finishing and the 'flash off' process is adopted to help further reduce energy consumption.

In terms of quality management, the Dalian Plant assimilates DongFeng Nissan's quality management system that covers the entire value chain. Aside from that, the plant intensifies its control over quality in the trial production of new vehicles, improves its complete vehicle testing devices and exercises stricter control over the quality of parts and components. 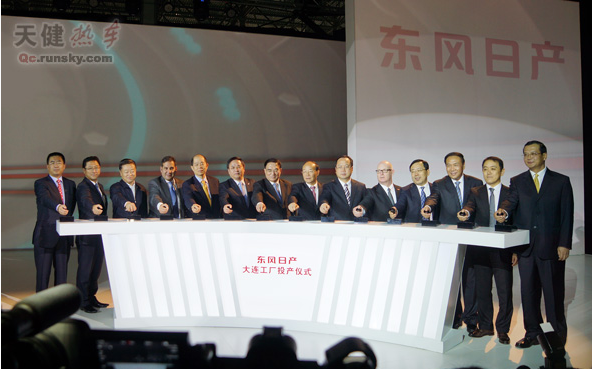