At 18:57:55 on June 22nd (Beijing Time), the DongFeng Team, an emerging force in the Volvo Ocean Race, made the destination of the 9th Stage Race in fourth place. In the end, the DongFeng Team took third place in the Volvo Ocean Race on its aggregate score. Out of the seven competing teams, the Abu Dhabi Team ranked first, followed by Brunel and DFM.

With the “DFM” sailboat’s success in reaching the destination in Göteborg, Sweden, the crew members had eventually completed the 9-month-long arduous challenge. As the professional sports event that takes the longest time in the world, the Volvo Ocean Race was ranked among 'The World’s Three Greatest Sailing Races' along with the “America’s Cup” and the Olympic Yachting Competition. In this top offshore sailing race, the DFM team consisted of up to six Chinese crew members. Looking back on the racing course, the DFM Team came first in two stages, runner-up in two stages, third-place in three stages and champion of one in-port race all told. They savored the pleasure of victory and experienced setbacks resulting from mast rupture and “Waterloo” in the 8th Stage.

The 9th Stage Race kicked off in Lorient, France, on the evening of June 16th and covered a distance of 960 sea miles. All the teams sailed along the European coastline, traversed the English Channel packed with forbidden zones, made a detour around Danish waters and arrive at the destination in Göteborg. Although the stage is inferior to other transoceanic stages in distance and difficulty, the DFM Team, Brunel Team and MAPFRE Team all strained their muscles for the Top 3 as the score difference between second and fifth place was only 6 points.

In the sailing process, the Alvimedica Team which ranked in fifth place before departure and fourth place at the end performed excellently and ran ahead of its rivals all the way. In the last sea mile to the destination, the DFM Team, MAPFRE Team, and Brunel Team overtook one another continuously. At last, the Alvimedica Team ranked first and the Brunel Team, MAPFRE Team and DFM Team crossed the destination line in succession. 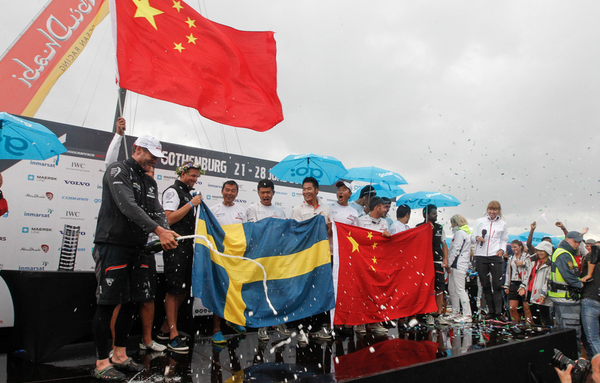