It is a fact that the Wuhan Tennis Open, ranked amongst the WTA Premier Five, is one of the WTA's Top 10 Events. As the exclusive title sponsor of the first Wuhan Tennis Open, DFM spared no efforts and put into service nearly 100 vehicles of various types (including passenger vehicles, sedans, commercial vehicles and electric sightseeing vehicles) every day in 2014 to provide this event with an all-around vehicle reception service.

While developing its business at a fast rate, DFM continues to actively serve and repay society and always deems the fulfillment of its social responsibilities as its important corporate mission. In the meantime, DFM sets great store by cultural development and organizes and supports cultural & sports events in a wide range of fields. In a sense, DFM’s sponsorship of domestic and international sports events is a vivid practice of its strong support to the development of cultural and athletic undertakings. Since 2012, when DFM’s subordinate Dongfeng Peugeot launched the 'Teenager Tennis Development Program', DFM has combined itself with the sport of tennis. As a matter of fact, the elegant, classy and aesthetic elements of tennis tally perfectly with DFM’s brand positioning.

In 2015, by joining hands with the Wuhan Tennis Open once again, DFM has conveyed its brand’s passionate, energetic and pioneering spirit at home and abroad, and shown its strategic vision of internationalizing the DFM brand. DFM vows to make all-out efforts to provide the Wuhan Tennis Open with all-around vehicle guarantee and service support. 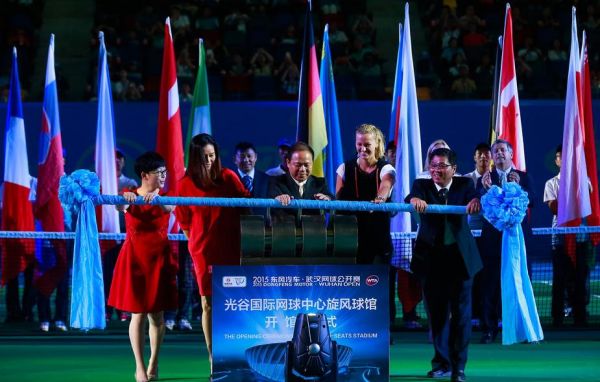